Sheriff’s deputies and police officers have a duty to keep us safe. However, they sometimes make irresponsible decisions. This was evident in a recent case of ours in which a Los Angeles sheriff’s deputy chose to drive while distracted and as a result, struck and killed a bicyclist.

Learn more about this case and how it shed light on distracted driving among law enforcement.

The sheriff’s deputy that struck and killed a bicyclist on Mulholland Highway described the incident as such:

The drawing below illustrates the incident from the story told by the deputy: 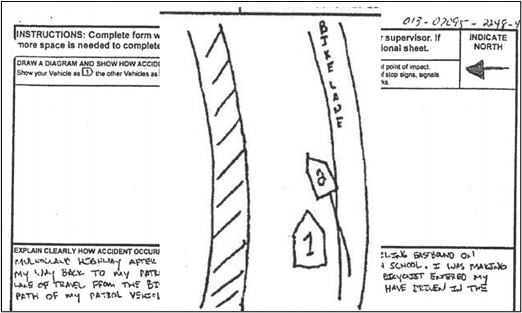 The physical evidence, however, told a different story. Our investigation determined that the bicyclist, Milt Olin, was struck in the bike lane, and not in the road after swerving out of the bike lane like the sheriff’s deputy had claimed. This photo below shows that the scrape marks from the point of impact were clearly within the bounds of the bike lane. 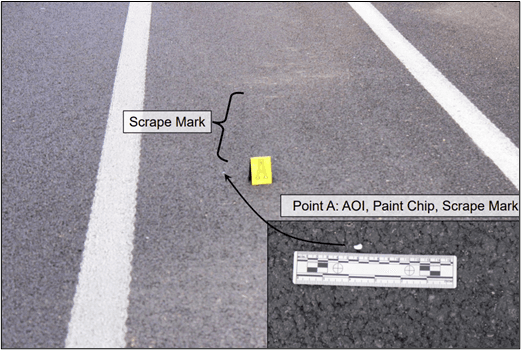 While we understood that Mr. Olin committed no wrongdoing in this incident, the question still remained as to how this crash happened in the first place. After all, the sheriff’s deputy had driven into the bike lane on a sunny Sunday afternoon on a long straight roadway. Our firm subpoenaed the sheriff deputy’s personal cell phone records, which showed that the deputy sent a text message within 15 seconds of the crash while on the straightaway. Then, he went directly to his Mobile Digital Computer (MDC) inside his sheriff’s vehicle to send another message. The combination of the personal cell phone text message and the message being typed in the on-board computer accounted for the failure of the sheriff’s deputy to see the bicyclist and the failure of the deputy to stay in his own lane. 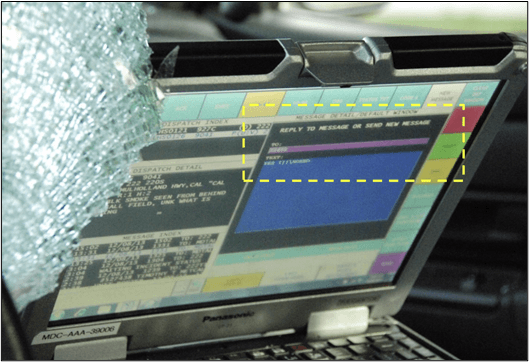 The analysis of the deputy’s MDC revealed the deputy was indeed distracted immediately before the crash. Photos of the MDC immediately after the crash showed that the screen had slammed down on the deputy’s hand in the impact. That was confirmed by the fact that the unfinished message on the MDC reads: “YES I][\ NOKKO.”

This tragic case illustrates that multitasking is a myth. Research in neuroscience has found that the brain cannot perform tasks simultaneously. Rather, the brain just switches between tasks quickly. Sadly, however, many people believe that they can perform two tasks safely at the same time, as did the sheriff’s deputy involved in this case. And, often, that decision has devastating consequences.

If you or someone you love has been harmed by a distracted driver, our Los Angeles trial attorneys are here to help. We encourage you to contact us to learn how we may help you obtain justice and hold reckless drivers accountable for their actions.