The finalist teams were UCLA School of Law and Chicago-Kent College of Law. UCLA beat its competitor in the final round that concluded on Sunday, Nov. 6, 2022, at the LMU Loyola Law School campus.

The winning all-women team included Kathryn Rosenfeld, Sydney Gaskins, Sophia Cherif, and Erica Kelley. Their coach, Justin Bernstein, is the director of trial advocacy at UCLA School of Law. Sophia Cherif received the award for "Best Advocate" in the final round.

GBW's Geoff Wells talked to the Daily Journal about the two-decade history of the NCTC and how the tournament is an opportunity for law schools from around the country to showcase their brightest stars. "The competition is a great way for young litigants to get real-world experience arguing a complex legal case," said Wells, who has judged this competition for many years and was this year's keynote speaker at the opening reception.

This year's civil case involved a wrongful death matter over the negligent hiring practices of a telecommunication company whose worker murdered a customer in his home. Each team argued its case in front of a panel of judges consisting of prestigious members of the Southern California bar. The students acted as advocates/witnesses to perform opening statements, conduct direct- and cross-examination of expert and lay witnesses, made closing arguments, and argue objections based on the Federal Rules of Evidence. 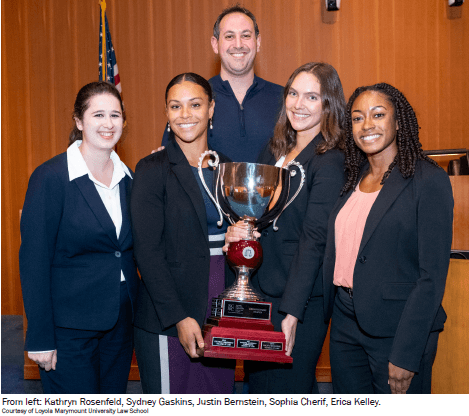