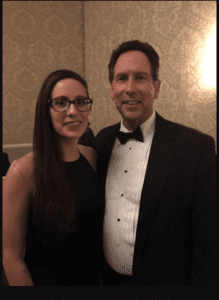 Partner Geoff Wells became the most recent recipient of the American Board of Trial Advocates’ Lee B. Wenzel Civility Award. He received the prestigious accolade late last month at the annual President’s Dinner Dance for the Los Angeles Chapter of ABOTA. The award honors attorneys who “elevate the standards of integrity, honor, and courtesy in the legal profession.”

The organization also celebrated bestowal of the Lifetime Achievement Award to Louis “Duke” DeHass and inaugurating the incoming chapter president, Robert A. Morgenstern.

“Geoff embraces the hallmark of being an ABOTA member,” said Morgenstern who has known Geoff for three decades and had first-hand experience going head-to-head with Geoff on the defense side. “He treats his opponents with dignity, civility, and respect,” added Morgenstern.

Fellow GBW partner Bruce Broillet, (and former ABOTA Civility Award honoree), gave a speech introducing Geoff at the event. He told the crowd it’s important for attorneys to understand civility is a strength, not a weakness. “When lawyers are decent towards each other they can do a better job of resolving conflict and getting to a conclusion which is in the best interest of the parties who are represented by the lawyers,” said Bruce.

The award is named after the late Lee B. Wenzel who Bruce worked with earlier in his career at Morgan, Wenzel, and McNicholas. “Lee exemplified the qualities of an excellent trial lawyer who was also civil towards his opponents and the court,” said Bruce who believes Lee would have been very pleased with Geoff being named in his honor.

“I always try to accommodate the other side, as long as I don’t surrender my client’s best interests, said Geoff Wells. “I think it’s important to maintain a positive level of communication with my opponent because, in the end, that will help get to a resolution of the case which is ultimately what the client wants,” said Geoff.

“It’s easier to resolve disputes when you’re dealing with other ABOTA members and Geoff’s that type of guy,” said Morgenstern.

“A prime example of Geoff’s civility is that he gets referred clients from defense attorneys who respect him even after a rough and tumble fight,” added Bruce.

ABOTA is a national association of experienced trial lawyers and judges dedicated to the preservation and promotion of the civil jury trial right provided by the Seventh Amendment to the U.S. Constitution.