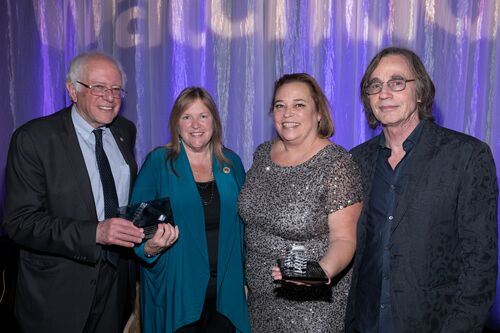 The Los Angeles attorney, respected by her peers and feared by negligent corporations, was honored alongside Bernie and Jane Sanders and musician Jackson Browne.

Earlier this month, the national advocacy group Consumer Watchdog held its Rage for Justice Awards to honor the heroes and heroines of the public interest. Christine Spagnoli, a partner at Greene, Broillet & Wheeler, LLP, received the group’s Lifetime Legal Achievement Award for her ongoing work on behalf of injury victims and consumers.

Spagnoli is the first woman to win this award, and she joins fellow GB&W partners Bruce Broillet and Browne Greene on the roster of recipients.

Other honorees at this year’s Rage Awards included Bernie and Jane Sanders, who were named Public Servants of the Year for grassroots organizing and consumer advocacy. Jackson Browne was given the Phillip Burton Public Service Award for his ongoing activism behind the microphone and in the streets.

A Dedication to Civil Justice

Julie Kane, president of the American Association for Justice, presented the Lifetime Legal Achievement Award. “All of us in this room rage for justice for our clients,” she said, “but there is no one I know – NO ONE – who has fought harder, raged harder for justice, than my good friend Christine Spagnoli.”

But her job doesn’t stop there. In addition to helping clients during some of their most difficult times, she’s proud to make the world a little safer for consumers – one case at a time.

“Many times, it’s the people bringing the lawsuits – and lawyers like myself, who are taking these cases to court – that have exposed the secret defects that consumers weren’t aware of, ” Spagnoli said. “And that has led to recalls and design changes so that they make the vehicles and tires safer.”